Your may know some of the symbols of Madrid, but do you know their meaning? Knowing a city, its culture, its history, includes knowing its emblems, its symbols, so I will dedicate this article to understand a little better Madrid as the capital of Spain and capital of region through its symbols.

Symbols of Madrid: The bear and the strawberry tree

The vast majority of national and international tourists visiting Madrid and Puerta del Sol take a picture with the statue of the bear and the tree. So it is theoretically impossible you don´t know this symbol of the city !!!

More than a statue (dating from 1967), this symbol appears in the shield of the city, from the thirteenth century. Bears used to live in the countryside around the cities at that time, as these animals abounded. In addition, they symbolized strength and therefore the same courage of who hunted them. They were one of the most admired trophies. Initially, the bear was leaning on a tower (symbol of Castilla, present in all the shields of both Castillas). The strawbweery tree was added a little later, to symbolize an agreement between the Villa and the Madrid cleric on pasture land and trees in Madrid. 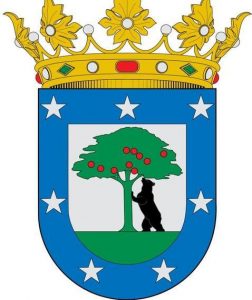 As you can see in the picture above, the shield of the Villa de Madrid (full shield date of 1544), there are 7 stars, which also appear on the flag of the Community of Madrid

“The flag of the Community of Madrid is crimson red, with seven stars in silver, five points, four three placed in the center of the canvas”

Crimson Red is the color of the Castillas to which Madrid is linked culturally and historically. The seven stars symbolize the seven brightest points of the Great Bear you can see shining upon the Sierra de Guadarrama, and all the historical territory of the former council of Madrid from the time of the Reconquista. These stars also appear in the shield of the city. The stars have 5 points, symbolizing the 5 Comunidades Autónomas around Madrid: Avila, Segovia, Guadalajara, Cuenca and Toledo.

The community of Madrid only existed since 1983. It is the last Community registered in order to balance demography and power between Madrid and its surroundings. Previously, Madrid was part of New Castilla region, that included the provinces of Ciudad Real, Cuenca, Guadalajara, Toledo and Albacete (provincial division is due to the  administrative reform of 1833), and therefore belonged to the two Castillas (Castilla León and Castilla La Mancha). I leave here a very interesting article about the history of Madrid.

The anthem created in 1983 reflects this new identity, young and strong, but also a sense of orphanhood since Madrid is abandoned by the cradle of Castillas.

no voy a ser menos:

Symbols of Madrid: other symbols

Have you noticed that Madrid buses are clear blue? Have you noticed that all advertisements, posters and publications of the Community of Madrid are clear blue too? TeleMadrid duse the same color for ads or institutional advertising. Here is the explanation: clear blue is the color of the Popular Party, the ruling party the Community since 1995. The mayor of Madrid has also been held by the same party since 1991. But since 2015, the city posters are purple, as our new mayor, Manuela Carmena is from a new party, Ahora Madrid.

The skyline that appears occasionally in buses represents other iconic and architectural symbols of Madrid, and they also identify the city. In 2012, the logo was created within the Strategic Plan for International Positioning of the City of Madrid, creating the “Madrid Brand”.

This logo ( you can see it is clear blue too) shows some of the symbols of Madrid that you will recognize without difficulty: the Museum Reina Sofia, Neptune and Cibeles fountains, Puerta de Alcalá, the “Pirulí” (Lollipop), the Kio Towers, Tower of Columbus and the 4 towers of the business center at the north of the capital. Here are my favorites:

– Neptune and Cibeles fountains: Why these two fountains are part of the Madrid identity? The answer is:  football! The first fountain is linked to the Atletico Madrid team, and Cibeles, to the Real Madrid. These two great teams come to celebrate their victories around its corresponding fountain.

– La Puerta de Alcalá is a signal of identity as it is one of the most famous monuments of the capital. It has become very famous throughout Spain in 1986 thanks to a beautiful song: “En la Puerta de Alcala”.  You will find here a lot of information about this ancient city gate.

– The “Pirulí”: If you are lost in the Salamanca district, around O’Donnel, you may find your way thanks to the “Pirulí”, a perfect refernece point with its 220 meters high. Torrespaña (the real name of this communication tower) owes its nickname to its resemblance to a lollipop.

– The Kio Towers: actually called the “Gate of Europe” Torres. They are the first inclined skyscrapers built in the world, inaugurated in 1996. Why “Gate of Europe”? They constitute a new gate to the north of the city. Its construction was ended by Bankia bank, whose logo appears on the facade of one of the two towers. Behind the construction of these towers, scams and corruption cases typical of the Spanish “housing bubble”. There is another explanation for the Kio Towers to be part of Madrid iconography: one scene of a really famous satanic comic film was shot there.  “The Day of the Beast”, in 1995, by Alex de la Iglesia. He is  one of the most famous Spanish filmmakers in the fantasy genre. This film (that we recommend !!) won five Goyas. 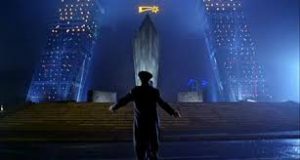 I hope you enjoyed this article, and you feel now a little more … “madrileño” 🙂